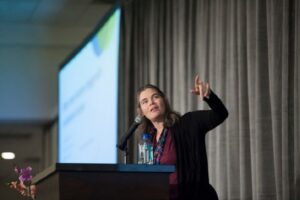 Now she hopes to help teach a new generation of entrepreneurs.

Koller is co-founder of Coursera, an online educational company designed to provide universal access to the world’s best education. Coursera offers nearly 2,000 free courses from some 145 university partners across 26 countries, ranging from Princeton and Yale in the United States to Nanyang Technological University in Singapore and the University of Melbourne in Australia.

As part of her drive to make great education and entrepreneurship skills broadly available, she agreed to develop a curriculum to teach students the basics of starting a business. She urges young people embarking on a challenging career to not be embarrassed to ask questions or request help. Here she offers some other pieces of advice.

Koller became an entrepreneur herself by chance. She taught and did research after she earned a doctoral degree in computer science at Stanford University in 1993, but was uncomfortable with the traditional model of education.

With two fellow scientists, she decided to test something different: They offered their computer-science courses online. Encouraged by the popularity of the courses, Koller developed techniques to make more classes available online. In 2012, she and Andrew Ng launched Coursera.

Soon, similar providers such as Udacity and edX emerged.

Many major schools initially saw online education as a threat to rather than an enhancement of their mission. Koller and other proponents of the new model didn’t fight them.

”Our approach is to learn from our critics, taking their concerns into account as we develop our platform,” Koller told the Huffington Post in 2014.