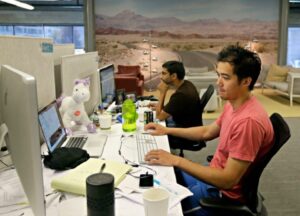 You may think you won’t have time to network while you are starting a new company, but networking, particularly online, is key, experts say.

“Take advantage of programs like GIST (the Global Innovation through Science and Technology initiative) and international groups like Startup Grind”  to increase your startup’s exposure, said Jim Chung, the founding executive director for the George Washington University’s Office of Innovation and Entrepreneurship.

Chung was among a panel of experts fielding questions from around the world, including Nicaragua, China, Honduras and Egypt, during a webchat hosted by the U.S. Department of State’s Global Innovation through Science and Technology (GIST) initiative.

Startup Grind that Chung referenced is a Silicon-based organization that helps startups in 85 countries through events, “fireside chats” and partnerships with organizations like Google for Entrepreneurs.

Here’s what they had to say about avoiding the most common pitfalls of starting a company:

Be quick: “Don’t take too much time developing [your product prototype] to perfection,” advised AnnaMaria Konya, founder and CEO of Equita Accelerator, which aims to help women in technology.  “The most important thing is speed. Whenever you’re ready just go and do it.”

Be flexible: Chung warned against getting too attached to a particular technology or way of solving the problem. This can make it difficult to change direction when you discover your initial idea or assumptions were wrong.

Be open: Having a really strong team whose members “can be honest with each other about your strengths and weaknesses” also is important when starting a company, said Keeth Smart, cofounder and COO of Physiclo, a fitness technology company based in New York City. Make sure you have a complimentary team of advisors who can keep you motivated when you run into challenges, he says.