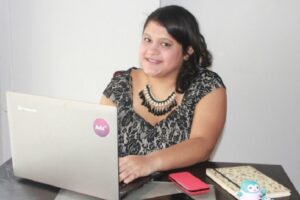 María Celeste Medina remembers seeing the first electronic messages from Antarctica. Her tech-savvy mother’s “bulletin board” correspondence — before today’s Internet — opened up a world of possibilities for her. She started building websites. And now, she’s building something else: a new generation of tech talent in Argentina.

So far, Medina has started her own software business, Ada IT. She advocates for women in tech. And she’s introduced thousands of Argentines to programming through “Code Your Future,” with hackathons and mentorship.

Not bad for someone still earning her degree.

“We were raised with the belief that with effort and work, everything could be reached,” she said in a recent interview.

Currently, women represent only about 11 percent of Argentina’s tech sector, Medina said. That statistic affects people’s choices. “How can we aspire to be something we can’t see?” she asks.

Medina is working to make tech visible to young women in Buenos Aires. She has already drawn greater participation in Code Your Future and helped launch Argentina’s first hackathon for high-school girls.

Inspired by her parents and following her own passion for technology, Medina won a 2015 “Change Agent” award from the international Anita Borg Institute.

For anyone apprehensive about coding or turning their skills into a business, Medina has this message:

“Don’t be afraid to do what you love in tech.”