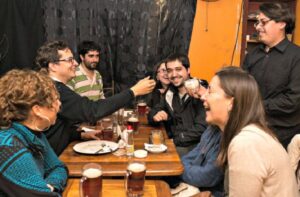 Growing up in the small Chilean city of Linares, José Sánchez Preisig was like many Latin Americans. He dreamed of traveling the world, living in another country and communicating with people of other cultures. But language was a barrier.

Learning a second language the traditional way — in a classroom studying grammar rules and memorizing vocabulary — didn’t appeal to him. Neither did apps that allowed him to learn a language from the convenience of his mobile phone.

Instead, the 27-year-old decided to come up with a better solution: learning language through talking. He launched Poliglota, a platform that organizes conversation groups for people seeking to learn a new language. The groups gather in public spaces such as parks, coffee shops and bars to converse. Anyone can join or host a group for free.

“In two years, we reached 100,000 people gathering together, face-to-face every week in more than 300 cities all over Latin America,” Sánchez said. Groups have also started in the U.S., Europe and China.

Using the same platform, users seeking more advanced language skills can pay a fee to join groups led by certified teachers. So far, more than 1,000 students have signed up for these conversation groups.

A pitch for social entrepreneurship

The opportunity to improve people’s lives is what Sánchez, who participated in the Young Leaders of the Americas Initiative, enjoys most about being a social entrepreneur.

Social entrepreneurs “are the ones who are pushing the human race forward,” he said. The important thing is to be empathetic. “To fix [other people’s] shoes, you have to put yourself in their shoes,” he said.

Being a social entrepreneur is not always easy. “A company is never established — there is always a risk of failing.”

But with adversity comes opportunity. “The best thing to do is to embrace that reality and become responsible for that. That’s what social entrepreneurship really means,” Sánchez said.