Creating Change: One Bottle, One Tyre at a Time
By Young Leaders of the Americas Initiative
6 MINUTE READ 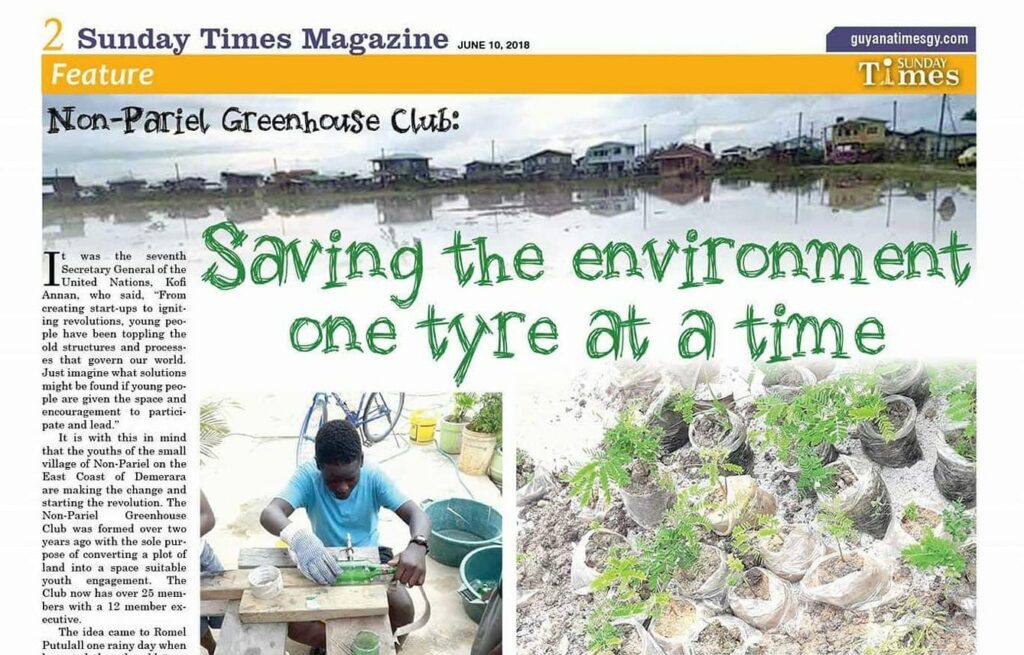 An old cow pasture near Georgetown, Guyana has been given a new life. What used to be an unused piece of land is now home to the Non-Pariel Greenhouse Club. YLAI Network member Romel Putulall started the group in 2016 as a way to engage other local youth and find a way to recycle some of the waste littering the neighborhood.

“The idea came to Romel Putulall one rainy day when he noted that the old ‘cow pasture’ was filled to capacity with hundreds of plastic bottles floating around and clogging the drains among other things. He then [thought] of how he could incorporate those bottles and make a difference and the idea was birthed to use those bottles and tyres [sic] to construct a building as well as fence the plot of land so the youths of the community could be meaningfully engaged.” (Guyana Times Magazine) 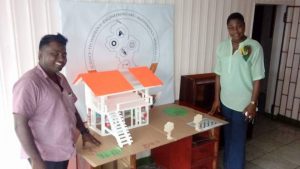 The club’s main project is the development and construction of a community development center site, which the club is building using largely recycled/reclaimed/salvaged materials. Not only is the project environmentally responsible, the entire program is structured around a community engagement model that has involved youth and members of the community in all aspects of the site’s development. The club organized youth volunteers to plant trees along the edge of the site, using reclaimed tires as edging/planters. They have recently completed a wall using salvaged tires along the boundary of the property (for which they are now seeking paint donations to dress). And they even hosted an overnight camp out with their youth volunteers as part of their site development activities, as their volunteers assembled to get stuck-in leveling and preparing the ground for further development and construction. Throughout all of these site development projects, the club has enjoyed strong support from local volunteers and supporters who offer time, supplies, and other resources for programs and gatherings. 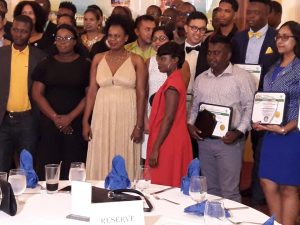 The Non-Pariel Greenhouse Club was recently recognized with a National Youth Award from the Ministry of the Presidency for outstanding achievements in advancing youth development through volunteerism. The Guyanese Department of Environment visited the club’s site in April 2018, and their profile has been growing. They’ve been featured in the Guyana Times and on local news television.

While they have been working on their community center site, the club has also been doing community outreach and local community programs. They participated in a local tree planting, and they organized a local community education field trip for members of the community to visit and learn about sustainable building practices in residential applications.

Romel and his colleagues have been doing such amazing work. They are truly outstanding members of the YLAI Network!

If you’re interested in learning more about the Non-Pariel Greenhouse Club and connecting with Romel, we encourage you to join My YLAI Network, our Facebook Group for YLAI Network members. You can also follow the Non-Pariel Greenhouse Club’s Facebook Page where they post updates about their project and opportunities for local citizens to get involved.

Inspired by Romel’s example? Get started creating change in your community with the YLAI Network’s online resources for social entrepreneurs: Community Organizing for Action and Creating and Maintaining Social Enterprises.