Crowdfunding: The Power of People
By Young Leaders of the Americas Initiative
7 MINUTE READ 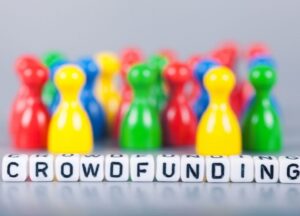 Colleen Wainwright wanted to do something big for her birthday, so she challenged herself to raise $50,000 in 50 days for WriteGirl!, a Los Angeles–based nonprofit that empowers girls through self-expression.
By the eve of her birthday, Wainwright had raised $61,517. How did she do it? She had leveraged the power of people. She had used crowdfunding.

Crowdfunding is the practice of raising financial capital from large groups of people, typically by using the Internet. Derived from the term “crowdsourcing,” crowdfunding harnesses the enthusiasm of social networks to raise money and pool resources to fund a project important to members of the social network.

While crowdfunding began as a means for struggling artists to finance their creative endeavors, it has evolved into a mechanism for nonprofits and startups to fund their projects too. Crowdfunding websites enable anyone with an idea to raise money from virtual strangers and eliminate many of the barriers to seeking capital from traditional investors and institutions.

How Does It Work?

There are two types of crowdfunding: contribution-based and securities-based.

In contribution-based crowdfunding, fundraisers solicit small monetary contributions in exchange for various rewards. For example, a musician raising funds for a recording session might offer rewards ranging from a copy of his first album for a small contribution to a private concert for a large contribution.

Whether employing a contribution-based or securities-based model, crowdfunding websites follow the same basic process: Individuals post online profiles describing their projects, and backers contribute to the projects that interest them.

A young woman, for example, might invent a watch that enables the blind to tell time. She cannot find enough investors to manufacture the watch, so she turns to a crowdfunding website such as Kickstarter or IndieGoGo.

She creates a profile explaining her project, her project goals, how much money she needs to reach her goals and exactly how she is going to use the money. She outlines what rewards potential backers will receive and when they can expect to receive them. She tells them who she is, what inspired her and why she is right for the project.

After creating her profile page, the young woman launches a marketing campaign, starting with her own social network. She sends emails to her family and friends sharing a link to her profile page. She uses social media platforms such as Facebook and Twitter to extend her campaign’s reach. Soon, people outside her immediate social network begin visiting her page. They learn about her, the project and its rewards, and they decide whether they want to invest.

At this point in the process, variations in crowdfunding websites come into play. Some websites, such as Kickstarter, release money to fundraisers only if contributions meet or exceed their funding goals. Other websites, such as IndieGoGo or GoFundMe, release any amount of money raised for a fee. Fundraisers must decide which crowdfunding website best suits their needs.

Here are some steadfast tips to crowdfunding success:

Whether raising money to pursue creative endeavors or recover from natural disasters, there’s a crowdfunding platform for everyone: