Rosario Diaz Garavito, the founder of The Millennials Movement, didn’t look to be labeled as an entrepreneur and a leader in her community when she began her small social media movement promoting youth volunteerism in 2013. She was just focused on doing the work. The recognition of the impact of her hard work came years later when she was accepted for the YLAI Fellowship in 2016. Now, Rosario embraces these titles and uses her platform to inspire other young entrepreneurs to take charge and lead to make a difference in their communities.

In celebration of Rosario’s hard work empowering a community of young changemakers, the YLAI Network team spoke with her to highlight the key factors of her non-profit volunteerism movement and get her essential advice on how to respond to the challenges of COVID-19.

Prior to starting The Millennials Movement, Rosario focused on her legal career. However, she quickly realized she was not passionate about the path she had taken. She then reassessed her passions and in the meantime signed up for a volunteer teaching post in Brazil. Here, she learned more about volunteerism and also learned about the United Nations Agenda for Sustainable Development. “It was a culture shock,” she states. “Seeing the difference between the two countries and the difference in programming between them,” as well as the emphasis on sustainability, she thought to herself, “why are we not talking about this in Peru?” and she decided she could do something about it.

When she returned to Peru in 2013, she launched The Millennials Movement and began offering resources on volunteerism. The social media movement began by encouraging local partners to volunteer and run activities addressing the Agenda for Sustainable Development. By the end of 2015, the movement had over 200 volunteers focused on engaging citizens in the local development processes of their communities. “In this way, through our efforts to build active citizenship, open democracies and facilitate citizen diplomacy processes, we generate positive changes that contribute to the global process by 2030,” Rosario states of the organization’s mission.

As the platform was evolving, and as she had seen a change in her community’s understanding of volunteerism, she applied to the YLAI Fellowship. This is where Rosario built herself up as a civic leader, where she made new connections, learned how to present her mission, and where she better understood her organization’s main goals. After participating in the Fellowship, and several other national programs, she returned to Peru energized and passionate to get individuals engaged. 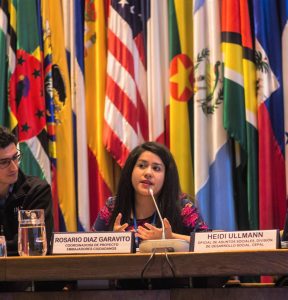 In 2016, The Millennials Movement launched the Peru 2030 Agenda Ambassadors program to empower and facilitate ownership for the sustainable development of citizens’ own communities. Since then, the three main priorities of The Millennials Movement include intervention in territories outside of the capital to organize conferences and raise awareness, particularly in schools; capacity building, delivering programs to train and report interactions; and facilitating participatory processes and consultations. “What motivates me most is how I can inspire others and support them to find ways to better their opportunities,” says Rosario. “We can contribute our part, so that people are then more empowered to take it into their own hands to make societies more inclusive and more participatory.”

Since adjusting to the global pandemic of COVID-19, Rosario is finding new and innovative ways to communicate with her network, given the absence of volunteering on the ground. Her team is discovering new tools to be remote and to enhance digital engagement. She wants to encourage network members that though they might feel pressure to overextend themselves in response to the pandemic, they need to focus on themselves mentally and physically to stay healthy.

Rosario also advises that young leaders need to get creative and build sustainable processes. She believes that to be a good leader, you must be creative, resilient, and focused. She believes, “you may not always get the recognition, but if you believe in yourself and focus on what you are doing for your community, you will be a good leader.”

The views and opinions expressed here belong to the author or interviewee and do not necessarily reflect those of the YLAI Network or the U.S. government.