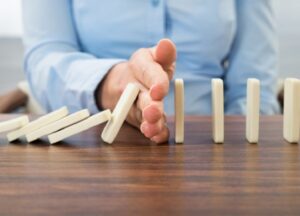 Nobody likes to fail. But when business leaders discuss their successes, they often start by talking about failure.

One such leader is Julie Wainwright. Wainwright was the chief executive of Pets.com, an internet startup that did not survive the 2000 dot-com crash. Failure, she says, will teach you the depth of your perseverance, and it can reveal that you have “more inner strength, more tenacity, more grit … than you ever thought was possible.”

After her experience with Pets.com, Wainwright went on to found a successful online clothing company. “Once you come out the other side of [failure],” she said, “you just might have faced your biggest fears and lived. The other side of failure is a big elimination of the fear of failure.”

Similarly, author J.K. Rowling says that, before she found success with the Harry Potter books, her failure shaped her as a person. “Failure meant a stripping away of the inessential,” says Rowling. “I was set free, because my greatest fear had been realized, and I was still alive. … Rock bottom became the solid foundation on which I rebuilt my life.”

The business insights resulting from failure are valued by the tech industry. Failed companies go out of their way to share their stories and the lessons they learned.

At X, Google’s moonshot-idea factory, director Astro Teller goes so far as to use bonuses to encourage his employees to fail. “The moonshot factory is a messy place,” he says, “but rather than avoid the mess and pretend it’s not there, we’ve tried to make that our strength. We spend most of our time breaking things and trying to prove that we’re wrong.”

In a recent TED Talk on the unexpected benefit of celebrating failure, Teller explained that he encourages employees to embrace failure because failure forces you to shift your perspective, and “sometimes,” he says, “shifting your perspective is more powerful than being smart.”

Interested in becoming an entrepreneur in your country? Get involved in Global Entrepreneurship Week.