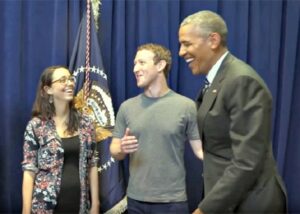 Could you pitch your business idea in front of cameras to President Obama and Facebook founder Mark Zuckerberg? Mariana Costa Checa did with flying colors, making her a celebrity in her home country of Peru.

The 29-year-old is the co-founder of Laboratoria — a social enterprise that teaches young women computer coding and helps them find work in the digital sector.

Peruvian news outlets have reported widely on that discussion, which occurred at the Global Entrepreneurship Summit in Silicon Valley, California.

Meeting with the president of the United States and the founder of Facebook sounds nerve-wracking, but “we couldn’t have asked for a better moderator,” Costa says. And she appreciates Obama’s genuine interest in her and the other two other entrepreneurs joining them on stage to address hundreds of small-business owners from around the world.

What does it mean for the company’s 50 employees — located in Peru, Chile and Mexico? “Everyone feels so proud to work for the organization,” Costa says. And for good reason.

Costa hopes her work inspires women entrepreneurs across Latin America, just as she likely found inspiration from Nermin Sa’d, another businesswoman at the summit. Sa’d is founder of Handasiyat.net, a hub for female engineers in the Middle East. Sa’d recounted for the gathered entrepreneurs the time a prominent official mentioned her company in a speech. Media attention, she learned, can be as good as venture capital — it can save a small company significant marketing costs.

Ready to pitch your business idea? Check out the video clip above for how it’s done.