Growing up in Tegucigalpa, Honduras, Rafael López enjoyed, among other pastimes, hiding his money in his grandmother’s closet.

“She told me I would be successful because I took care of my money,” Rafael says.

Rafael, a 2018 YLAI Fellow and an entrepreneur in Honduras, saw years later a need for his skills in the country’s cultural heritage sector.

“My sister, who had been working at the United Nations, noticed that ethnic groups in Honduras were particularly disadvantaged, many with limited access to economic opportunities,” Rafael says.

To address this, Rafael and his sister co-launched Malengu, a line of accessories showcasing the work of traditional Honduran artisans. The Malengu name, an amalgamation of Maya, Lenca and Garífuna, harkens back to some of the country’s largest indigenous communities.

“She was a single mother struggling to make ends meet. I wanted to provide her with the tools and resources she needed to express her creativity and to provide for her family.”

Today Rafael is working with Xiomara and other artisans to market their products, all the while preserving traditional Honduran culture.

On one visit to the city of La Esperanza, Rafael recalls stumbling upon a book of Lenca patterns.

“It was a guide for fabrics and patterns like I’d never seen. I remember asking the Lenca artisans there if they could produce similar designs. They told me they could, but the products wouldn’t sell because they were too ‘different.’”

Rafael and his sister, intrigued by what they’d found, selected a pattern and set of colors for a purse, all from the Lenca book. The result was, as Rafael describes it, amazing.

“It was special because we had discovered a new way to get these traditional designs out.”

For Rafael, these products are testaments to the many layers of Honduran culture.

“There is no one Honduran,” Rafael says. “We are a mix of Spanish, Indian, black and Mayan culture.”

For those looking to get into the market, Rafael stresses the importance of taking that first step.

“It’s important to start somewhere. Our business began by simply reaching out to artisans and making some phone calls.”

One challenge for Rafael, though, has been finding and building relationships with artisans. In the end, working well — and diligently — has earned him their respect.

“A leader, as I see it, is someone you can trust within the first five minutes of meeting.” 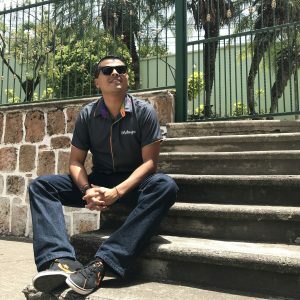 More important still, as Rafael explains, is staying motivated in the face of financial constraints.

“You will face a number of challenges,” Rafael says. “But that’s the beauty of all of this.”

In the end, Rafael makes a point of returning to his original motivations and to the people whose lives he’s changed along the way.

“Just remember what inspired you when you started your initiative and keep going.”

For Rafael, that motivation is sustaining and protecting traditional Honduran culture.

Interested in Rafael’s work and in making your own business idea a reality? We recommend starting with our Fundamentals of Starting and Running a Business and Smart Entrepreneurship: Next Steps in Expanding Your Enterprise courses.

Rafael López is a 2018 YLAI Network Fellow and the co-founder and CEO of Malengu, a Honduran fashion brand. Malengu helps Honduran artists showcase their work online by conserving traditional culture while embracing modern methods. He is also the creative director of Oneblis, a digital marketing agency. He has a master’s degree in motion graphics from BAU and a bachelor’s degree in graphic design from UNITEC.