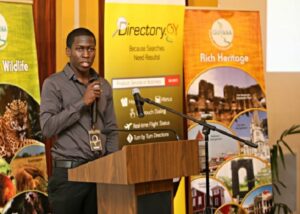 When Triston Thompson and his cousin decided to launch information technology company IntellectStorm in 2014, they knew they would have an uphill battle.

“IT is not something that is adopted that much in Guyana,” the 20-year-old explained. “Businesses are still stuck in their old way of doing things.”

Thompson calls one of his company’s products the “Google of Guyana.” This mobile app, called Directory.gy, is a resource on “everything Guyana,” from current news and upcoming events to businesses, restaurants and public services. Directory.gy was recognized by the Guyanan government as the official application of the 50th anniversary of Guyana’s independence and took first place at the PitchIT Caribbean Challenge in Jamaica.

A challenge for Thompson was figuring out how to get the word out about his company.

“It’s difficult in Guyana to come into the entrepreneurial ecosystem and just sell yourself alone,” said Thompson, who grew up in a village called Melanie Damishana, about 17 kilometers from Guyana’s capital of Georgetown. You have to expand your network and get people to “know you and what you can do.”

Participating in a Young Leaders of the Americas Initiative pilot program helped him do just that. Thompson received valuable feedback on his ideas, and encouragement — “one of the most helpful things” about his YLAI experience. Since then, he has expanded his professional network and collaborated with another YLAI fellow on an IT application.

Thompson is optimistic that more IT solutions will catch on in Guyana and that IntellectStorm will become one of the top Guyanan tech companies. What’s next? More connections and stronger relationships with other entrepreneurs and businesspeople. “Even people in government can be good connections to build,” he adds. “You never know who could be the key to your progress.”

Connecting with other entrepreneurs has helped Thompson stay positive and focused on his venture, especially during the first year when funds were tight. “Being part of a community of entrepreneurs helps you to realize that you’re not alone, that your problems are not unique,” he said.

His advice to other entrepreneurs? “Surround yourself with positive people who will build you up and not tear you down.”