Avena Prince aims to alleviate the strain of unemployment and poverty in her country of Dominica. She is working hard to achieve this goal by encouraging community members to master different skills, such as sewing and garment design.

Owner and founder of the vocational training company Royal Globe Inc., Avena has grown, redesigned and strengthened her business, adapting to the needs of her society and always thinking about how to improve efficiency. Avena, a 2017 YLAI Fellow, also offers advice for future entrepreneurs.

Avena noticed the large-scale unemployment throughout Dominica, and her concerns were confirmed by the Central Development Bank in 2017 when Dominica was listed as one of the Caribbean countries with the highest unemployment rates. Additionally, Avena noticed that few people, if any, were looking for a means of solving the problem of unemployment.

She dedicated her time and business toward providing accessible vocational skills programs that would effectively enable local people to augment their income to improve their lifestyle and provide a means of making and saving money. Her ultimate goal is to provide the necessary skills for people to go into business by themselves and work toward building Dominica’s GDP.

Growing up in a small village in Dominica with fewer than 800 people, Avena excelled at school and was an honor roll student, which gave her a lifelong love of teaching and education. Avena became a local tour guide and saleswoman while engaging in online learning with Cambridge International College. Through the college, she studied sales, marketing and management, with the ultimate goal of achieving a B.A. in marketing management. The many different roles that Avena has filled throughout her lifetime have fed her desire to decrease national unemployment and have taught her the incredibly important skill of multitasking. 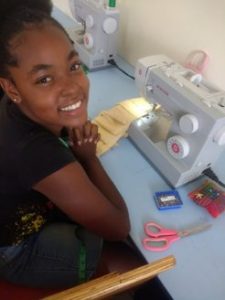 Avena’s organization, Royal Globe Inc. (formerly Royal Globe Agency), has always been dedicated to helping community members improve themselves and providing lessons on important skills that would later help with job security. The central aim of this business venture is to improve the lives of people by equipping them with skills to be self-sufficient or self-employed.

Most members of the Royal Globe program are women. However, the company does not exclude men, and encourages them to join as well. The vocational skills training programs are largely focused on sewing skills, for adults or children, and run for roughly four months. Royal Globe is committed to providing access to additional vocational skills training programs and currently offers programs in other creative skills, such as nail design, crochet, and home-decor merchandise production.

Avena advises young entrepreneurs to start small, particularly due to the possibility of unforeseen obstacles. When Avena first decided to go into business, she had very grand ideas and thought she would be able to begin her venture by undertaking all of them. She quickly discovered this was an unrealistic expectation, as she didn’t have all of the resources necessary to achieve all her goals at the time. As time passed, Avena gradually built on the resources available to her at the start and improved them to get Royal Globe Inc. to where she wanted.

Another tip that Avena has for aspiring entrepreneurs is to persevere. She underlines the fact that some things in business ownership and management will be easy, while others will be quite difficult. Collaboration is key in the workplace, she says, as it provides a means to obtain a goal that one would likely have difficulty with on their own. Avena emphasizes, “Never give up, and don’t be afraid to ask others for help!”