Want to knock down the walls holding back your ideas? Then forget about a traditional business plan
By Young Leaders of the Americas Initiative
6 MINUTE READ 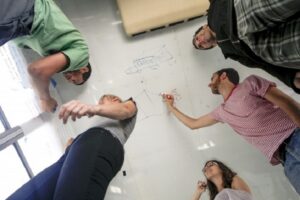 Sean Griffin has co-founded more than 20 startup companies, but he is not a believer in the traditional business plan as the all-important first step.

A business plan, he says, is based on conjecture. Writing the plan can take a lot of time, and you might find your plan irrelevant if the market changes while you draft it. When you implement it, reality might prove your assumptions wrong.

A few years ago Griffin unveiled StartUp Cup, a competition that works like a small-business “accelerator without walls,” which focuses on developing companies without a business plan. Its model emphasizes faster idea-to-market tactics, customer development, “bootstrap-funding,” team building and revenue generation.

“The goal is to derive some revenue as quickly as possible,” Griffin said, so that a cash-strapped entrepreneur can build a business on the go.

The approach worked in Ghana for Dziedzorm “JayJay” Segbefia, now a fellow of the Young African Leaders Initiative, a U.S. program that supports an emerging generation of African leaders. After writing a 150-page business plan for his adventure-sport travel agency, Bravehearts Expeditions, Segbefia said he was “waiting for the miracle that would bring in an investor,” preferably one with at least $2 million.

The miracle never came, but StartUp Cup taught Segbefia to jump-start the business. He and his partners launched with less than $100 and won the 2013 Ghanaian competition. In the first year of operation, Bravehearts Expeditions posted $7,000 in operating profits.

Testing a business model repeatedly against market realities and evolving it accordingly is part of Griffin’s approach.

Since 2011, 70 StartUp Cup competitions have been launched in 45 countries. More than half of the competing startups are owned by women.

Working with the State Department and corporate sponsors, Griffin licenses at no cost the visual tools and technical assitance to host a StartUp Cup competition. Awards usually include seed money as well as coaching and mentoring in Silicon Valley. But Griffin said the competition process itself provides an “accelerator without walls” for participants.

Waleed Fahmy said he learned about networking and financial management during a StartUp Cup held in Cairo at which his digital-design company, Webkeyz, won.

In Pakistan, where many science and engineering graduates work as employees at large corporations, Binish Bhagwanee found her own route when she joined the small startup Go-Fig Solutions Pvt Ltd., which sells counterterrorism software.

StartUp Cup was “mind-changing” for Bhagwanee, the firm’s digital chief, and her colleagues. She says she doesn’t think they will “ever go back to regular 9-to-5 jobs.”