Who gets to be an entrepreneur?
By Young Leaders of the Americas Initiative
9 MINUTE READ

At first glance, they’re all corporate tech giants: organizations that have entirely revolutionized their sector through innovation. These are household names, companies whose products have such reach that their brand identities are embedded in our everyday lives. And according to Brad Feld, American entrepreneur and venture capitalist, it is this quality of relentless pioneering that makes these companies champions of entrepreneurship. In his book Startup Communities: Building an Entrepreneurial Ecosystem in Your City, Feld uses the Facebook/Twitter/LinkedIn model as a solution for anyone hoping to bring economic prosperity to their city. Whether intentionally or not, Feld creates a direct relationship between tech and entrepreneurship–as if the two things are somehow one and the same.

This is a premise I would have accepted myself, up until recently. Now, thanks to the experience of working with sixteen young entrepreneurs from Latin America & the Caribbean, I have to say that I think Brad Feld is wrong: or at least, he’s missing part of the puzzle. Billion-dollar “techpreneruship” is just one piece in a dynamic ecosystem of people and companies hoping to ignite social change. 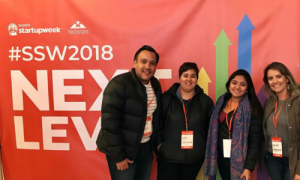 In my role as a programs intern with the Seattle World Affairs Council’s International Visitor Program, I had the opportunity to work closely with a group of change makers as part of the Young Leaders of the Americas Initiative (YLAI). The YLAI Fellowship is one example of a number of U.S. State Department exchange programs designed to enhance the leadership skills of rising social and business leaders, and to build a lasting network of professionals across Latin America, the Caribbean, and the United States. While in Seattle, the YLAI Fellows were hosted by organizations and businesses where they contributed their expertise and perspectives while simultaneously learning new technologies, strategies, and building relationships with their American counterparts.

The 2018 YLAI Fellows cohort was exceptional–and diverse. The Fellows are leaders in a wide range of industries, including education, construction, ecotourism, sustainability consulting, and food and wine (to name just a few). I’ll admit—one Fellow, Daniel, leads a startup developing an app!—but by and large, these entrepreneurs represented something quite different than I am accustomed to seeing in my home city of Seattle (home of Amazon, a Google campus, and numerous other start-ups aspiring to be the “next big thing” in technology). My imagination had been so co-opted by the Brad Feld definition of entrepreneurship that I had stopped seeing restaurateurs, small business owners, and social sector leaders as “entrepreneurial.” What bothers me is that I don’t think I am the only person who has become ensnared by this idea—one that I believe dominates cities like Seattle and San Francisco with robust “entrepreneurial ecosystems.” 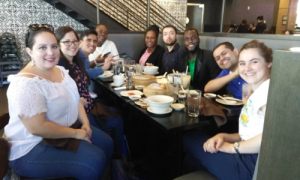 Spending time with the YLAI Fellows showed me something entirely old-fashioned about their enterprises (even those pursuing change through 21st century technologies and business models). There is something incredibly significant about doing work that is embedded in your place, your home. Take YLAI Fellow Cindy de León. Her marketing agency, El Coctel Creativo, connects Guatemalan artists seeking freelance work with restaurants in need of more impactful branding and graphic design. Cindy purposefully works with SMEs (small-to-medium enterprises). I asked her what she saw in her future, as far as growing her business and securing bigger accounts. “Oh no,” she told me. “I might expand geographically but I never want to stop working with smaller businesses.” The assumption behind my question is the assumption that drives so much of techpreneur culture: that growth is king, bigger is better. Put more users on Facebook. Sell more items on Amazon. Generate more LinkedIn profiles, more Tweets. Cindy has an entirely different vision of what it means to be successful—and it is based on working with other people, other small businesses.

In American culture, we have this narrative of the rugged individual: the person who pulls themselves out of poverty, the small business owner, the community figurehead who embodies neighborly compassion and civic virtue. To be sure, we still have that in Seattle. There are plenty of treasured local businesses and strong community leaders. I had just stopped seeing them. 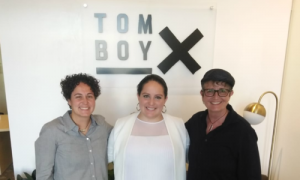 The principle underlying an exchange program like the YLAI Fellowship is that by participating in these rigorous U.S.-based fellowships, young entrepreneurs can learn and grow. And moreover, the YLAI Fellowship is a two-way exchange program: now that the U.S. based fellowships are done, the Seattle fellowship hosts have the opportunity to continue collaborating with their YLAI Fellow—this time in the Fellow’s home country. The fruits of these fellowships thus not only benefit Latin American and Caribbean communities, but support the ongoing learning and development of Seattle’s non-profit and business leaders. In fact, when I reflect on the time I spent connecting with the YLAI Fellows, I acutely recognize what myself—and a city like Seattle—can learn from people whose businesses grew up not exclusively filling a niche in the market or solving an inefficiency, but with the primary goal of serving others. I hope that even as globalization and multinational corporations continue to rise, cities like Seattle are able to recall their roots—and embrace the hardworking small business owners and community leaders that call it home.

Who gets to be an entrepreneur? Someone who dreams of doing things differently, who will lead bravely, and who will stay humbly grounded in principles of responsibility. This is what I learned from the 2018 YLAI Fellows. I guess Brad Feld and I see the term “entrepreneur,” differently, and we’ll have to agree to disagree.

Adapted from an article by Natalie Pond, World Affairs Council in Seattle.

Natalie Pond is an intern with the International Visitor Program and an MPA Candidate at the Evans School of Public Policy and Governance at the University of Washington.